A Round a Month
JULY

'Love looks not with the eyes, but with the mind...' 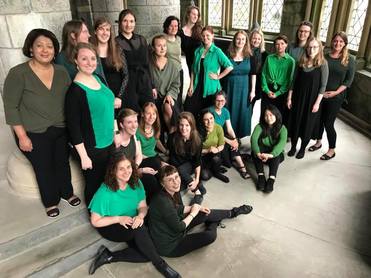 Photo (c) Harry Campbell
As is often the case with Madrigirls' music, these rounds (not one, but two!) were born of necessity. We were delighted to sing at a joint birthday part in one of the beautiful private gardens that are dotted throughout Glasgow. The hosts were fond of Shakespeare and asked if we could include some settings in our programme... "No problem" we said... "We have loads of Shakespeare settings"... Turns out we didn't.

The first round 'Love looks not with the eyes' was written in approximately 15 mins before a Madrigirls rehearsal. The second took slightly longer, but we're really pleased with the end result! Picture to the right was taken just before we premiered these rounds at St Conan's Church, Loch Awe, June 2018.

- The first round works better by itself than the second, but both work. At Madrigirls we learnt round one one week, and then round two in a different week and then put them together, which could be used to link warmups and build confidence in learning and retaining music by ear.
- The key is not at all fixed! We tend to perform this in a higher key. Lower voices can sing round 2 only (and vice versa!)
- The first round is in 4 parts, the second in 8, so potentially you could have your choir singing in 12 parts. There is definitely scope for a third round in this set! Feel free to add to it!